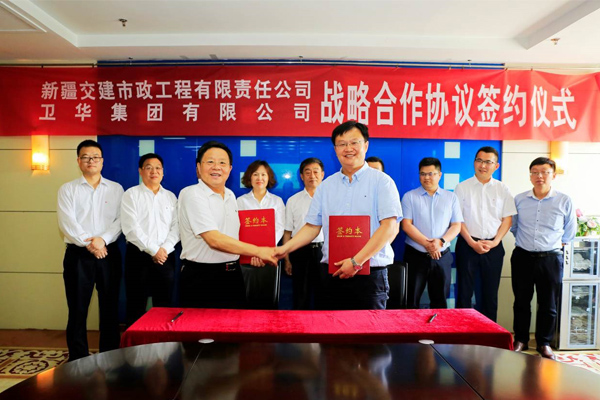 At the signing ceremony, Han Xianbao, welcomed the arrival of Wang Zhihua, and the arrival of General Manager Wang Guosheng, and introduced the development of Weihua development, optimization, and innovation of intelligent parking tower.

Han Xianbao said that with the upgrading of consumption, China's car ownership continues to hit a new high, and it is expected that by 2020, the country’s car ownership will reach 330 million, and the new market demand will reach more than 500 billion. The problem of parking shortage has become increasingly prominent, so parking problem has a huge opportunity. Weihua Group seized the opportunity and developed and launched a series of intelligent 3D garage system. The signing of a cooperation agreement is conducive to complementing each other's advantages. It is expected that in the future development process, the two sides will uphold the principle of mutual benefit and jointly promote development.

Wang Zhihua said that the establishment of a joint venture with Weihua will have huge potential for future development. In the later period, deeper cooperation may be considered. The key point of intelligent car parking system is the operation and maintenance after sales. The automatic parking fee deduction function shall be realized from the technical level, which saves time for parking and improves service. Sharing resources between the two parties will surely achieve new development in the field of parking system.

Xinjiang Construction was established in 2011. Its main business projects are rail transit facilities, urban roads, bridges, squares, urban greening, and garden landscapes. The qualification rate of the project has reached 100%, and the excellent and good rate is over 85%. All the projects participated in are key projects in Urumqi. They have received attention and praise from all walks of life. A number of projects have also been awarded the Excellent Project of the Autonomous Region, and they have won national and autonomous regions City Gold Cup Award.